Kruse's Keys: Read "Beyond the Rice Fields" to Experience the Beauty, Love and Tragedy of Madagascar

It’s hard to express how much I looked forward to reading this book.  I spent three years living and working in Madagascar beginning in late 2013 (my collected writings from that time can be found here and here).  Prior to my arrival, I had scoured the libraries and internet for anything that I could find in English on Madagascar (my list of collected articles and books can be found here and here.).  Unfortunately, this was a rather small task once one gets beyond the myriad travel guides and nature-oriented literature.
Then near the end of 2015, I came across a post from Ann Morgan, who spent a year reading a novel from EVERY COUNTRY IN THE WORLD.  In the post, she lamented the fact that not a single novel from Madagascar had ever been translated into English, but that a translator named Allison Charette had received a PEN grant to translate one and  she’d chosen “Beyond the Rice Fields.”  So I’d been literally waiting for the last two years for the book to be released and it did not disappoint.

Malagasy author Naivo has crafting a heart-wrenching tale of love sets amidst one slave’s seemingly impossible yearning for success and upward mobility.  Impressively, the author’s expansive piece of pre-colonial historical fiction doesn’t hold back in addressing some oft-considered taboo subjects in Madagascar such as slavery and the wholesale execution of Christians under Queen Ranavalona’s reign in the 19th century. The narrative centers on Tsito, a child whose family were “forest people” and captured, then sold into slavery by the ruling Merina highlanders (called amboalambos, i.e., pig-dogs by the atandroy or antakarana--it’s unclear which tribe the author refers to when he uses the denotation ‘forest people).  He grows up with his master Rado’s family and develops a bond with Rado’s daughter Fara.  The story unfolds through dueling narratives between these two characters. 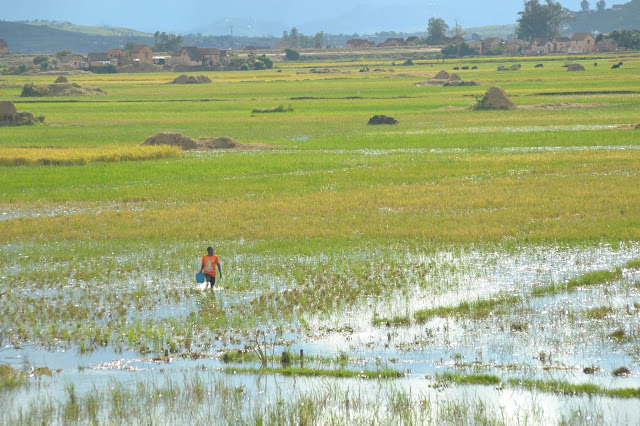 The book reads as a mixture of hainteny (oral tale/poetry) and tantara (historical narrative) with a liberal dosing of Malagasy proverbs/adages (I counted 29 of them).  One in particular proves emblematic as Fara ponders her destiny:
Love is like rice, when you transplant it, it grows, but never in the same way.  It retains a bittersweet memory of its first soils. Every time it’s uprooted it dies a little; every time it’s replanted, it loses a piece of its soil.  But it also bears fruit (188).
Fara’s observation captures the tension and movement with Beyond the Rice Fields as the central characters and family find themselves uprooted numerous times amidst shifting factions as King Radama dies and the throne is passed to his wife Ranavalona.  Her reign marks the beginning of an increasingly fraught relationship between Christianity and political power in Madagascar, especially since the crown Prince becomes a Christian.

While neither Fara nor Tsito are themselves Christians, they find themselves caught in the ill effects of Ranavalona’s power consolidation as she upends traditional tribal power alliances and eventually publicly executes thousands of Malagasy Christians.   Within all this chaos, however, Fara and Tsito ultimately find each other.
In one key conversation, we hear echoes of the fampitaha song from the novel’s beginning as Fara lovingly spars with Tsito:
“And how will you love me?”
He replies: “I will love you like my eyes, the windows of my soul; without them, I am as weak as a child, but with them, the world smiles at me.”
“Then do not love me, for I will be of no use to you in the darkness.”

“I will love you like the door to my home, protecting me from enemies and keeping the hearth warm.”
“Then do not love, for you push through me without shame to achieve your ends.”
“I will love you like the Sovereign of this realm, mistress of the our lives and destiny.” (238)
Naivo proves himself a skilled and brave writer in Beyond the Rice Fields. With the publication of his novel in English, he has illuminated a period of Malagasy history previously hidden from most of the world.  Along the way, he has brought to life the rich traditions and deep culture of a country and people that are all too often wrongly associated solely with lemurs and coups by radio DJs.

“Sing for your highest dreams, dance for your most starstruck plans.  Then you cannot lose (120).”

Proverbs:
Songs and Hainteny:
We’ll go to the City of Thousands
To eat the laying hen
To eat the fatty zebu hump (18)

To mediate the difficult
As saffron does (73)

Come forth! Let them appear
And the most beautiful will triumph
They will be judged
And the ugliest will disappear (126)

Tell me how I can keep your love:
If I knot it into a corner of my gown
The thread might break it and I could lose it.
If I place it in the palm of my hand
I’m afraid it might dissolve into dampness…
Instead, I’ll put it in my heart
Although it will make me perish
Will that not make me love you all the more? (131)

The trees of sweet-smelling wood
Counting two, there finding three
There on the tall mountain
On Mount Adrigiba
They wanted to sleep
Pressed against each other
At least rejoice, oh my soul,
That you do not possess
The one you do not love (146)

I implore your forgiveness, O my earth
I appeal to your mercy, O my earth!
You, who cover our dear ones
You, their final shelter
We trample you underfoot
But you are the water’s cradle
And you grow the ears of rice
And you absorb all sorrow
O my earth (348).